The City selected a team of contractors to complete the Goodviews Abatement Project (GAP.) C.A. Rasmussen is the contractor responsible for constructing the GAP.

Clearing and grubbing continues to progress onsite. There has be an increase in truck traffic in the area along Ramona Rd., Garvey Ave. and Atlantic Ave. as large amounts of dirt/debris will be removed from the site to make space for the stabilization work and sidewalk to be completed. We apologize for the noises and sounds that are occurring on the construction site as the City works with contractors to stabilize the hillside for the safety of the Monterey Park community. Construction of the new retaining wall is set to commence in late May.

Most work is anticipated on weekdays from 7:00 a.m. to approximately 7:00 p.m. with weekend work occurring intermittently.  Construction activities should be anticipated and work will continue through December 2022.

Lane closure: The parking lane, sidewalk and #2 eastbound lane on West Garvey Avenue from east of Campanita Court to west of Abajo Drive will be closed for the duration of the project.

Metro Bus Service: There are two eastbound Garvey Avenue L.A. County Metro bus stops (Route 106) at St. Steven’s Serbian and Abajo Drive that will not have service for the duration of the project. According to L.A. County Metro, patrons can access eastbound service at Casuda Canyon Drive and at Hitchcock Drive. For up-to-date information, please visit Metro’s site at www.metro.net/service/advisories/. 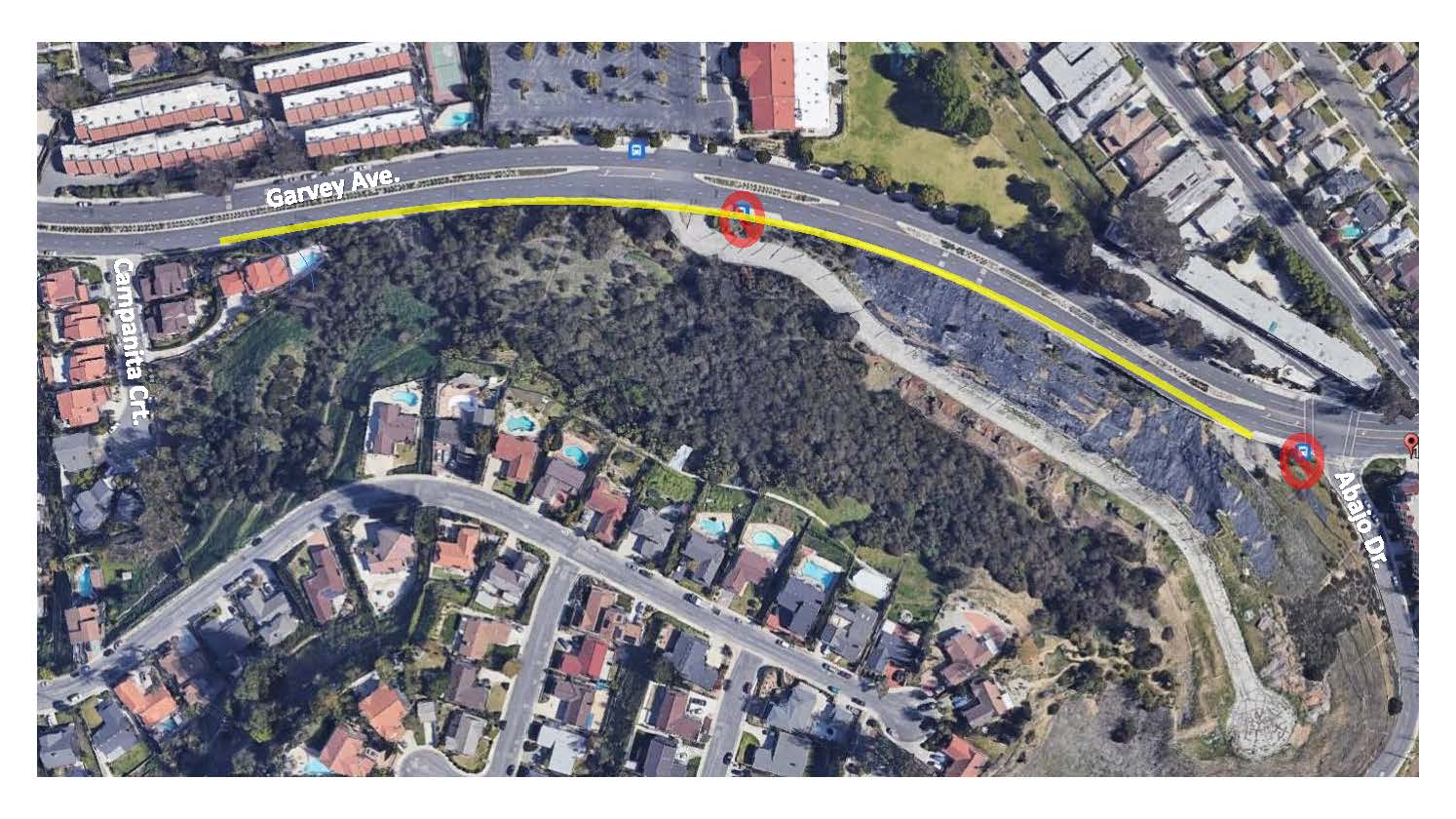 For more information, please contact the City Manager's Office at (626) 307-1485 or at CMO@MontereyPark.ca.gov.

The site of the Goodviews Abatement Project was originally approved for development in 1978 and 1979 for 31 residential dwelling units. That original project was developed by the Good Views Land Development Company. Consequently, during the 40 years since that time, the GAP site is commonly referenced as the “Good Views” property.

The Good Views property is historically unstable. In 1983, Garvey Avenue was damaged and blocked by a slope failure resulting in the City taking emergency action to construct various soil stabilization and drainage infrastructure. In 1986, the City entered into an agreement with the Good Views developer to construct permanent structures intended to stabilize the hillside that was to be completed by December 5, 1986. In 1987, 1988, and 1989, a number of City consultants advised the City regarding what measures were required to stabilize the hillside. The Good Views property owner failed to implement any of those recommendations. As a result, the City in 1991 issued a notice of violation to Good Views that the Project site constituted a public nuisance requiring abatement.

After providing notice on an annual basis, the City in 1994 was unable to contact Good Views representatives. It is unclear what happened to Good Views by that time. In 1997, the City Council declared the property to be a public nuisance and commenced abating the property. Among other things, it installed a gate on the abandoned private road. The City took additional abatement action in 2000 and 2002. In sum, the City expended an estimated $200,000 to $300,000 to abate nuisances on the property in the years before 2013.

Starting in 2013, the City again undertook various code enforcement actions against the new property owner of 1600-1688 West Garvey Avenue. Among other things, the City directed the property owner to submit an erosion plan; remove trash, junk and debris; abate weeds and overgrown vegetation; and maintain slope drainage. Between 2013 and 2015, the City issued six different administrative citations regarding the property in response to various issues related to the property including, without limitation, a tree that fell onto West Garvey Avenue in 2014 that both blocked the street and brought down power lines owned by Southern California Edison.

Concerned that the El Niño storms in 2015 would result in significant slope failure at the property, the City filed a civil lawsuit against the property owner to abate the nuisances on the property. That lawsuit allowed the City to immediately take action to temporarily stabilize the hillside. Those efforts, however, did not constitute a permanent solution to the overall issue of hillside stability.

On October 13, 2021, the City informed the property owner that it had defaulted on the settlement agreement and that the City would construct the GAP. Construction is expected to begin on this project February 1, 2022.

Below are links to download public documents regarding the GAP including the Settlement Agreement(s); the City's abatement warrant; the City's Status Reports (filed with the Superior Court); and various staff reports submitted to the City Council.