Every ten years, local governments use new census data to redraw their district lines to reflect how local populations have changed. Assembly Bill 849 (2019) requires cities and counties to engage communities in the redistricting process by holding public hearings and/or workshops and doing public outreach, including non- English speaking communities.

What is redistricting?
Every ten years, districts must be redrawn so that each district is substantially equal in population. This process, called redistricting, is important in ensuring that each city councilmember represents about the same number of constituents. In Monterey Park, the City Council is responsible for drawing council districts. Redistricting is done using U.S. Census data, which is released around September 30, 2021.
Why does redistricting matter to me?
Redistricting determines which neighborhoods and communities are grouped together into a district for purposes of electing a councilmember.

The City Council will seek input in selecting the next district map for our City Council. You have an opportunity to share with the City Council how you think district boundaries should be drawn to best represent your community.

You can contact the City Clerk at (626) 307-1359 or via email at mpclerk@montereypark.ca.gov to find out more about how the process works.

What do the existing council districts look like?  www.MontereyPark.ca.gov/DistrictElections 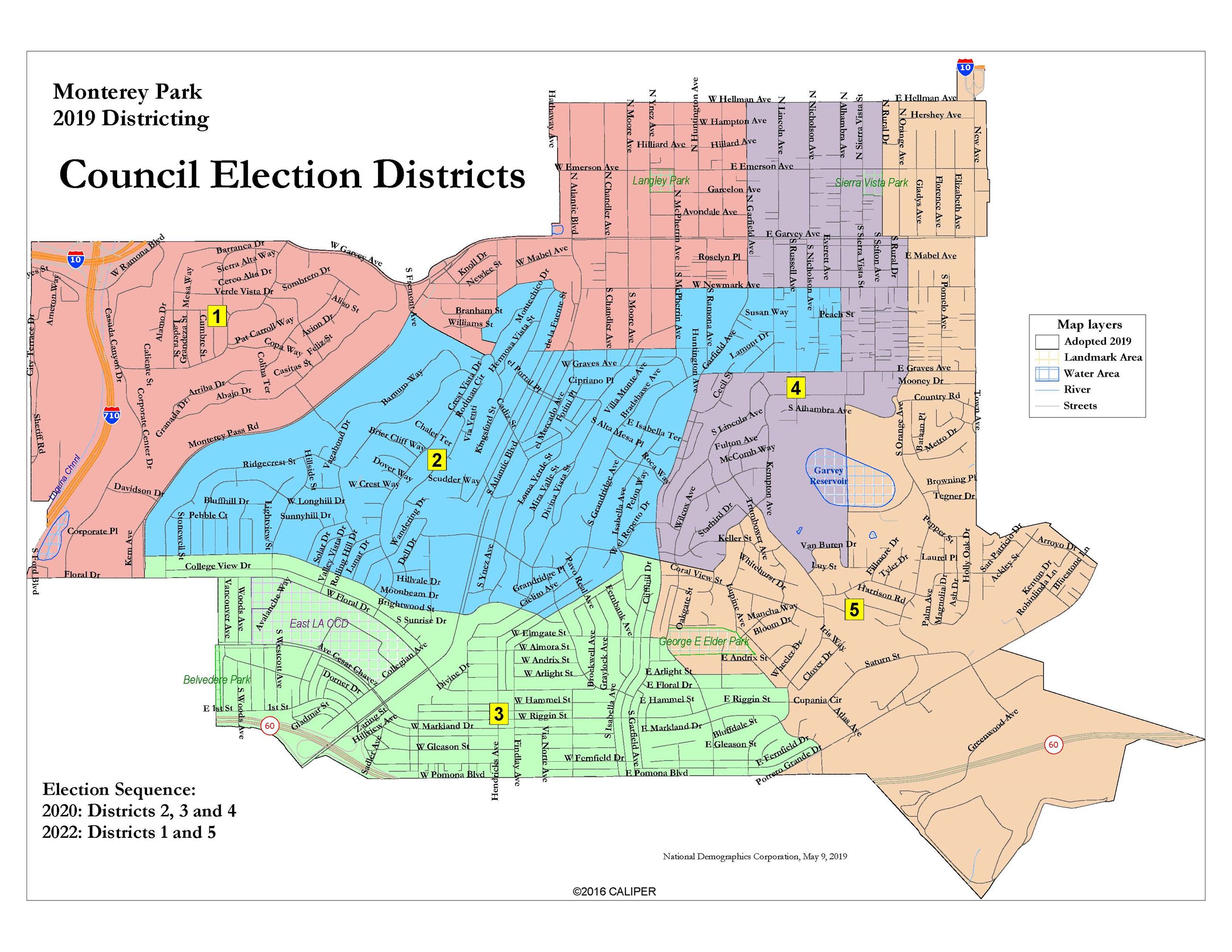 How can I get involved?
The City Council will be holding hearings to receive public input on where district lines should be drawn. The schedule for the hearings will be posted on the City’s website at www.MontereyPark.ca.gov/Redistricting2021

You can also submit public comments, including suggested draft maps, by emailing: mpclerk@montereypark.ca.gov

Meetings are conducted pursuant to Section 3 of Executive Order No. N-29-20 issued by Governor Newsom on March 17, 2020. Accordingly, meetings will be conducted either electronically or physically in the City Council Chambers.

Virtual Meetings - Public comment may be submitted via telephone during the meeting, before the close of public comment, by calling (888) 788-0099 or (877) 853-5247 and entering Zoom Meeting ID: 289 222 5995 then press pound (#). When prompted to enter participation ID number press pound (#) again.  Participants wanting to make a public comment need to enter “*9”  at the beginning of the item to be added to the rotation for public comments.  Press “*6” to unmute yourself when called upon to speak.